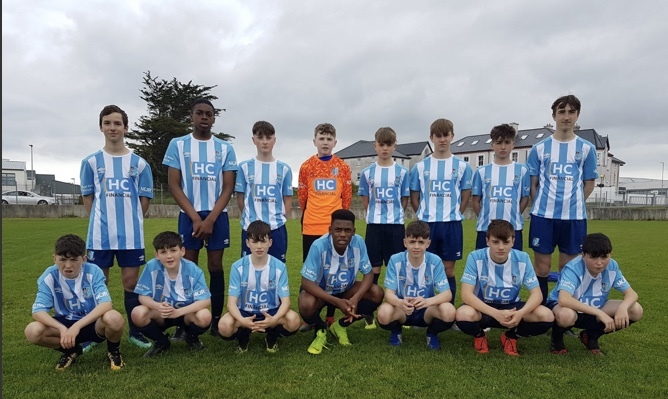 On Sat afternoon (1st June) the U14 Devon lads travelled out to play Maree Oranmore FC in the Premier/Championship Cup Semi Final. The front pitch was in splendid condition and thankfully the weather cleared up nicely for the 3pm KO. It was Oranmore who got out of the blocks quicker and had a number of decent chances to secure the early goal. Devon Keeper Lee O'Sullivan was called upon to make a string of excellent saves in a spell when Ben Costello tormented the Devon defence and pulled the trigger on several occasions only to be denied by some technical brilliance from Lee. These early scares were in a strange way the catalyst to drive on the Devon lads and eventually their quick enter play was rewarded when Evan Ridge gave a lovely pass into box to Caden Grant who deftly meet the cross and found the net. This goal was followed up by a splendid second when Caden Grant provided the assist and Piotrek Szymanski finished to the net with a powerful effort. Shortly before half time the Devon lads were dealt a heavy blow when Pierce Greally their centre half was forced to go off with an ankle injury, lady luck did not seem to be with the Devon lads as their other centre half Eric Diarra was ruled out prior to game through injury. At half time the Devon lads were forced to make a number of changes to rejig their defence.

The second half started similar to first half and it was Oranmore who went for the early juggler to try and get back in the game. Once again Devon keeper Lee O'Sullivan was called into action, making a number of double saves to deny the Oranmore onslaught, his highlight save being a one handed push back save to knock the ball over his bar when it looked like the ball had gone over his head. After this Oranmorepurple patch the Devon lads sorted outtheir newly organised defence and the lads started to play some neat football. Powerful running and a close range finish by Bright Broderick resulted in the third goal. This goal effectively killed off the Oranmore challenge. Another goal followed shortly afterwards, a super header from the goal machine Piotrek Szymanski who got the fourth.Chukka Orujuba near the end of the game addedtwo additional  goals to put the icing on the cake. The game finished out a six nil victory for the Devon lads. In fairness to Oranmore on another day those early missed goal chances in both halfs could have written a different script for this one. Credit to referee Gabriel Darcy and his two officials who were fair to both sides and did a professional job.

There were strong performances all over the park for Devon, stand out performances were Robert Madden and Milo O'Malley at the back who worked their socks off, Bright Broderick in the middle of the park, Dylan Devine Darcy on the wing, upfront Piotrek Szymanski put in another powerhouse shift. In the end it was keeper Lee O'Sullivan who got the nod for Man of Match with a string of super saves during several crucial stages in the game.

Missing for Devon on the Day were, Eric Diarra, Sean O'Connor, Charlie Cox and Cillian Griffin.

The Devon lads will now meet a very strong Mervue team in the U14 Premier/Championship Cup Final.. This game is fixed for an evening game, next Wednesday (5th June) and will more likely be played in a neutral venue as EDP is unavailable due to pitch maintenance. Please come out and support this young Devon team who want to end the season on a high!