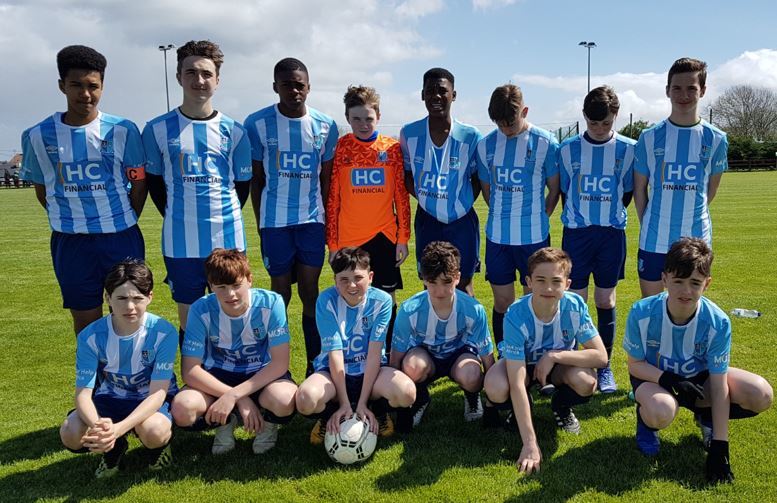 On a beautiful summers evening (Thurs 9th May) the U14A lads welcomed Mervue to Drum. While Mervue needed only a point from this game to confirm the league, the Devon boys were hoping to restore some pride with the reality that the league title was probably out of their grasp due to recent games not going their way. The previous encounter between these top of the table teams was only decided by one goal so all the omens were this one would also be a close affair. The early exchanges ebbed and flowed and no team seemed to get any decent goal scoring opportunities. However, after ten minutes played, a defensive slip allowed the razor sharp James Lukua to nick the ball just inside the Devon half, sprint towards goal before sticking the ball pass the oncoming Devon keeper. The Mervue lead was not to last long as Devon keeper Lee O'Sullivan rushed off his line to collect an incoming ball proceeded to kick a long ball over the Mervue defense in the flight path of the Piotrek Szymanski who managed to put the ball past the oncoming Mervue keeper. One would have thought that this Devon goal would have driven the lads on but it was Mervue who seemed to get the better of the last ten minutes of first half when they had their purple patch of the game. This was duly rewarded when James Lukua got a fantastic individual goal when he seemed to evade several Devon players on the edge of the 18 yard box allowing him enough space to slot neatly to the corner of the net. This was a cruel blow to the Devon lads before half time. The second half was a tough battle with both sides putting in some typical derby like performances with nothing spared on both sides. Similar to the first half there were not too many scoring opportunities the game had resorted to a middle of the park gun slinging match which provided great excitement for the decent crowd who turned up for this game. Piotrek Szymanski had one great opportunity to get the equaliser but the Mervue keeper got down low to make a decent save. In the end time ran out for the Devon lads and Mervue won the game on a 2: 1 score line. The Devon lads could have no complaints and the Mervue lads were good for their win (remarkably their 12th straight win of this year's campaign) and in doing so confirmed themselves as worthy Coley Smith Premier League Champions. On behalf of Salthill Devon FC we congratulate the management team of Brian Laffey and David Speakman, captain Mark O'Halloran and his teammates on their great achievement in winning the league title and also collecting the Connaught Cup. Already looking forward to next year's campaign and more pulsating stuff between these two sides