Déjà vu for U14A's in return Derby Match up in Cappagh 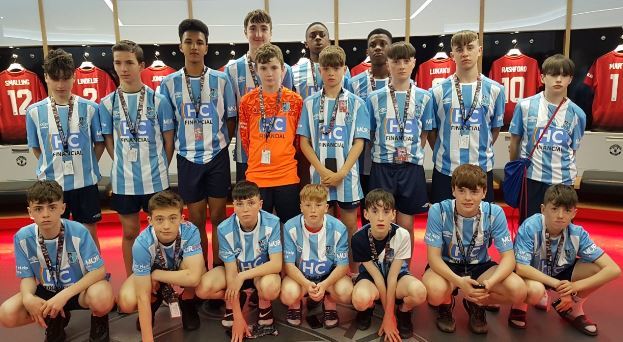 On Tues evening (23rd April) the U14A lads took the short trip over to Cappagh Park to play the return leg of the local Derby Vs Knocknacarra FC. Despite very tired legs and bodies from the Devon lads recent weekend trip to Manchester, having played 6 matches over two days in swelting hot conditions, the lads were looking forward to getting back to cooler conditions and playing in their domestic league. The Cappagh back grass pitch was in super condition and a good local crowd turned up to watch both teams. Despite having more of the ball in the first half and creating the better scoring opportunities the Devon boys could only manage the one goal scored by Sean Orujuba after a nice link up play from the back. In the second half some of the lads who were rested from the weekend came on and the game quickly changed with the Devon lads getting on top. It was a case of déjà vu from the first leg of this derby in Drum with Piotrek Szymanski racking up his second hat trick of the season when causing the Knocknacarra defense all sorts of problems. Right at the end the Knocknacarra got a consulation goal from a corner. In fairness to Knocknacarra they had depleted numbers on the night and the lads on the pitch put in a terrific shift in this game, especially in the first half when they contained the Devon lads.

Next up for these lads is away match Vs Tuam FC on Sat 27th April @ 2pm. All support welcome for this one.